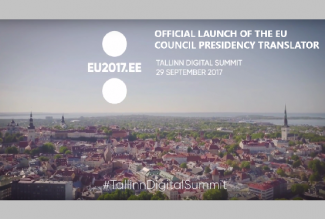 Tilde will unveil a multilingual communication tool developed for the EU Council Presidency next week at the Tallinn Digital Summit, a high-level event for EU heads of state, including German Chancellor Angela Merkel and French President Emmanuel Macron.

The launch events will begin with a 3-hour workshop for EU Council Presidency staff and Estonian public sector translators at the Estonian National Library on September 27. On Friday, September 29, the tool will be officially unveiled to EU heads of state and government at the Tallinn Digital Summit.

The Tallinn Digital Summit is a platform to launch high-level discussions on further plans for digital innovation with the aim of keeping Europe ahead of the technological curve while becoming a digital leader, globally, in the years to come. Summit discussions will be focused on the essential topics of building a digital future for Europe: trust, security, e-government, industry, society and the economy.